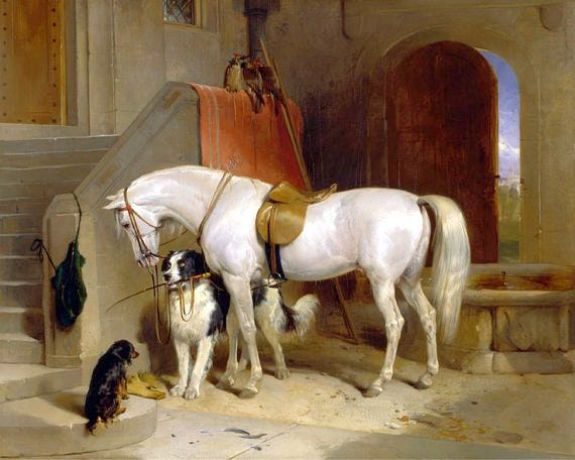 My focus at Rocky Valley Farm is to expand on the genetics of the Original Old World European Newfoundland Landseer, specifically regarding the genetics associated with the old world temperament and tight lip, and not the newer line of the Landseer ECT developed from different stock later in time which possesses a completely different temperament and much higher energy level.  If you are interested in the Landseer ECT Type I would suggest the Pacific Coast Landseers who imported beautiful standard ECT Landseers to the states for breeding and describe the difference associated with their ECT Landseer dogs quite well with the statement of "untiring runners".  I breed the complete opposite type of temperament and it is a rare sight to see my dogs run off for they prefer to lay at the feet of their people. The Original Old World European Newfoundland Landseers are exceptionally calm and gentle and exhibit completely unswayable devotion and loyalty. Rocky Valley Farm breeding program is focused solely on the Old World European Newfoundland Landseer traits.

Want a Newfoundland that doesn’t drool? So did I. I love this breed but also love my home to be clean; it was a dilemma. Then I came across a Newfoundland Landseer from Europe that didn't have those traits and I acquired her immediately. I started to research about her and discovered that the original Old World Newfoundland Landseers use to have tighter lips and eyes. I searched for old lineage in America and found a male with old Canandian lines and an American female from completely separate blood lines that also exhibited those rare traits. I blended these lines to have the widest gene pool possible to improve health and promote those desirable traits. We have retained their best offspring and are breeding these beautiful animals to place in approved homes only.

They are different from most American Newfoundlands in the following ways;

They have a tighter lip – Significantly reduced or No drooling!! : )

They have tighter eyelids – no eye issues

They tend to live longer - Many American Newfoundland’s have shortened life spans due to the close line breeding.

Panda - notice the tighter lip line and eye such as the portrait above. These are traits of the original Newfoundland Landseers.

Thats correct! The original Newfoundland Landseer's were not only the devoted Newfoundland companion with life saving instincts of today but also a dependable livestock guard dog as well. But unlike other livestock guard breeds they adore their people and are gentle house companions. They possess the ability to separate the two jobs of people vs livestock distinctly. When in the house they behave as the devoted family pet associated with the Newfoundland characteristics. They are the sweetest, most reliable dogs with children of any breed. It always amazes me how my Bella will lower herself down way below the head of a toddler just so they wont be afraid of her and how she will "oh so gently" pat the child with that massive paw. ﻿They are highly intelligent and easily trained to house rules and can even be content apartment dwellers for they require very little exercise. Though they are a submissive canine to their family they will protect the people and property in their territory. I believe them to be the ultimate dog, loving and protecting everyone and everything. I am purposefully breeding to strengthen these old traits. I absolutely adore these dogs!

The original Newfoundland Landseers were much cleaner and healthier animals all around. The old European Newfoundland Landseer lines have a much tighter lip than is associated with the standard American Newfoundland﻿s' who possess extremely loose lips as a result of American Breeders incorporating Mastiff genetics a second time in the gene pool. This results in excessive drooling. They can barely drink out of a bowl without half of it draining to the floor. Inserting this gene also loosened the eyelids resulting in weepy inverted lids. The Old Newfoundland Landseer lines have significantly reduced drooling and some dont drool at all like my Bella and Lila. More important though is that they are not nearly as prone to the health issues with the hips, eyes and heart and the weak immune systems inclining them toward intestinal upset and various other ailments resulting from tight line breeding﻿. They also have a shortened life span. I am purposefully encouraging old Newfoundland genetics in my breeding to reduce these traits. 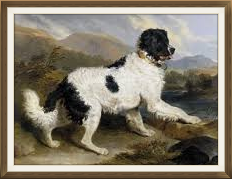